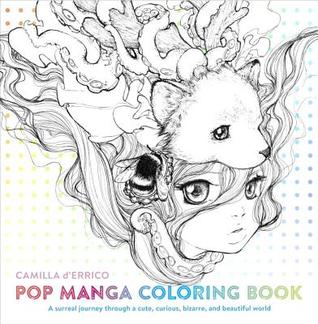 I readily admit to loving these adult coloring books. Sometimes you get a winner and sometimes not with them. I liked this one.
Let’s see why.
I haven’t ever really gotten on the whole Manga thing because I’m totally boring and it takes too much energy lately for me to decide what pants to wear.
But this is cute.
There is a melting Queen or King. I can’t figure out which but it is my favorite. 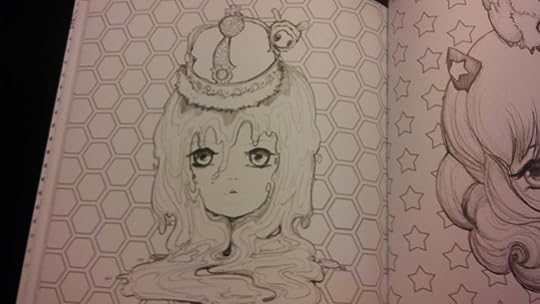 One of those pages that must be a rule that is included of a food collage. (Thank the goodness of books that this one is not full of them!) 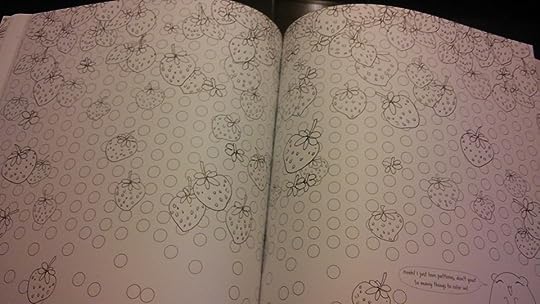 Then I started really looking at these cute little pages…and my mind went there. (This could go as horror. Little creatures trying to get the girlies ice cream. Then they must have done something to her mind. Because now she has a tree head. 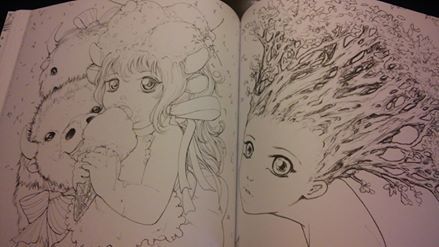 Then she cries because the butterflies want to eat her brain. 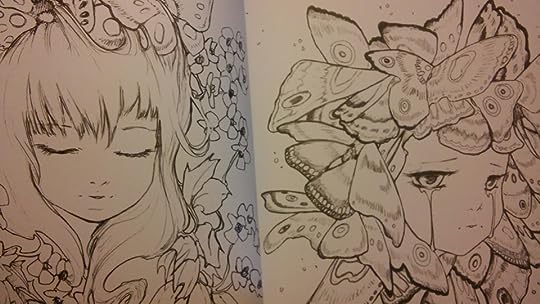 There must be some hungry critters..because now the birds want to eat her brains. I’m terrified of stupid birds so this one is pure horror. 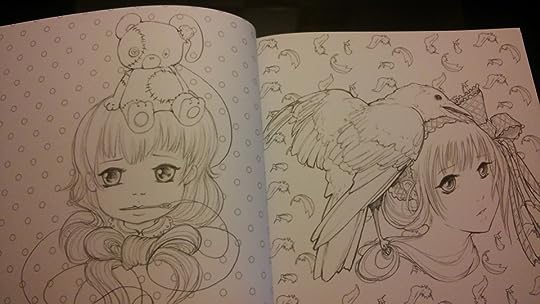 They took her soul. 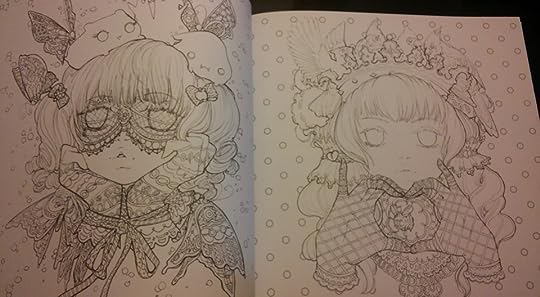 And then ended up having tentacle sex. 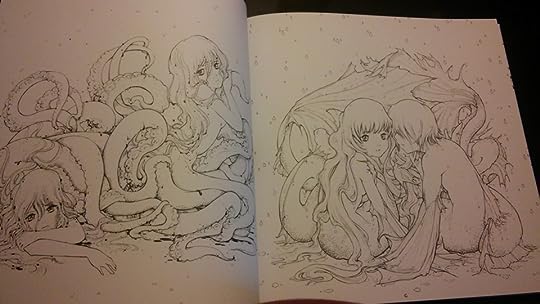 I’m going to color the heck out of this book.

Booksource: Bloggingforbooks in exchange for review

The Civil War is just ending and Captain Jefferson Kidd is traveling through Texas reading the newspapers to people. He won’t read them local news because everyone gets riled up and the shooting might start. He tells the stories of what is going on in Europe and other countries.

He is offered a 50 dollar gold piece from someone he trusts to take a 10 year old orphaned girl to her relatives. She had been taken by the Kiowa when she was six years old..so she is a tad bit wild to everyone’s eyes.
So begins the adventure of a road trip in a wagon across Texas.

These characters. Wow.
Captain Kidd is the older cranky sort of man that is perfect in this type of book. I completely had him pictured in my head.

Then Joanna-full of spunk for a ten year old. Her character is now one of my favorite children ever in a book.
Their journey includes a “Ten cent shootout” that was perfection.

This book is a small thing, but the author does an amazing job of putting so much into the story that you don’t feel short changed at all.

Booksource: I received a copy of this book from the publisher in exchange for a review. 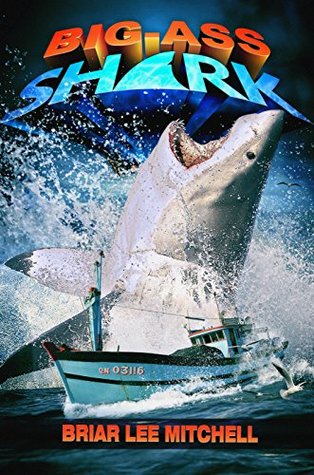 I have to admit. This book is getting one star just for that title alone.

Misty is minding her own business one day. Shooting a video for her mom about how things are going in California. She hasn’t gotten that acting job yet, but the weather is great. She smokes a bit of weed, kicks back and is enjoying the ocean.
Until she sees it.

A Big damn shark comes at her and she takes off running. It’s headed towards a near-by beach. Full of tasty people!

She warns the lifeguards and people really don’t believe her. She is saying that a shark that big is out there? Yeah whatever. 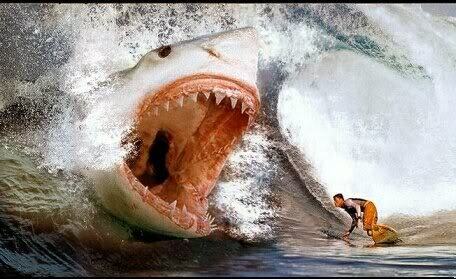 But one thing she has is one of it’s teeth. It chomped down on her lawn chair and some rocks when she was scrambling to get away from the sucker.

She gets some help finally after proving that the shark is in fact real…and kinda might get hungry. Like most books involving huge animals that might eat us..the humans in this book act normally and decide to either capture or kill the big ass shark.

I wish it had eaten all of them up. 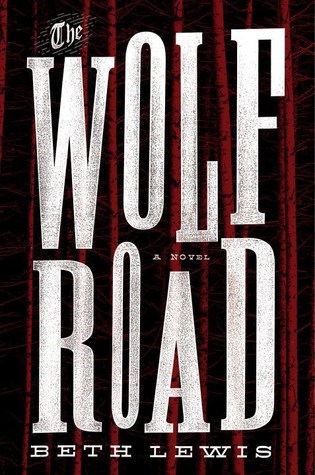 All I know is that one day all the maps became useless and we had to make our own. The old’uns called the day the Fall or the Reformation. Nana said some down in the far south called it the Rapture. Nana was a babe when it happened, said her momma called it the Big Damn Stupid. Set everything back to zero.

An event has happened that set the world back to a time with no technology. Mother Nature is boss and seven year old Elka learns the hard way when her Nana is ‘lost’ during a strong storm. Elka ends up in the woods alone and starving. She gets taken in by a reclusive man she calls Trapper. Trapper teaches Elka all he knows about hunting, trapping and survival. He makes sure she knows to stay away from any person that she might run across out in the woods.
He never lets her go with him on those late night wolf hunts though.

One day after Elka has lived with him for years she finds out that the man she calls Daddy is a serial killer. She takes off into the woods with just a knife to escape from him. Her parents had gone North when Elka was a baby to get rich from a gold rush. She heads toward North to find them.

Told in the first person the book is completely inside Elka’s head. You might think that sounds boring but this book is anything but that.

Along the way Elka picks up a shadow in the form of a wolf that shows up when she seems to need him the worst.

She also falls for a man’s pretty face..

She learns quickly to trust only herself.
Men got one hell of a weakness, and when it ain’t their arrogance, it’s the dangling bits.

She saves a woman from a bad fate and they tag up. Agreeing to try and keep each other alive.
Penelope didn’t have no fat on her, no reserves for her body to live off ‘tween meals. If that was the price for beauty and the desire a’ men, well hell, you can keep it. Alive and ugly is better than pretty and dead.

They are followed by a woman law officer that is determined to bring in Elka and Trapper (who is following Elka on her journey.)

Elka’s character is haunted by demons but you can see that she does what she needs in order to survive. She knows what she wants and goes about getting it.
Smell a’ bacon.
Ain’t nothing in this world like it. Salt-cured, sliced thick, line a’ juicy fat crisping up in the pan. Anyone what tells you they don’t like bacon is either stupid or lying. Either way that ain’t no one you can trust.

This book is extremely dark and sometimes mystical. (There is my warning for the readers that are going to yell about how gross it gets)..Crap I loved this book! 4.5 stars!

Monsters ain’t real ‘cept in kids’ imaginations, under the beds, in the closets. We live in a world a’ men and there ain’t no good come out of tellin’ them they monsters. Makes ’em think they ain’t done nothin’ wrong, that it’s their nature and they can’t do nothin’ to change that. Callin’ ’em a monster makes ’em somethin’ different from the rest of us, but they ain’t. They just men, flesh and bone and blood. Bad’uns, truth, but men all the same.

(Booksource: I received a copy of this book for review from Netgalley and Bloggingforbooks.)