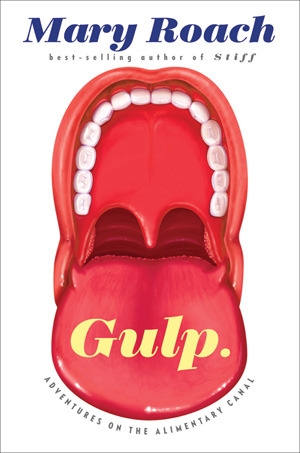 WARNING: Sometimes I have the mind of a 12 year old boy. Beware of reading this review if farts and bodily functions gross you out.

Mary Roach may have that mindset too. So far I’ve read books by her detailing what happens with dead bodies and more than you ever want to know about your Alimentary canal.

I love having random facts in my head. My husband hates that fact about me. This book added in a way in which he may never be the same again.
We tackle our bodies food from intake to outake in this book with several detours into what happens along that route.

Ms. Roach also enters into our prison system to learn how far your rectum can stretch. Hey, it’s all about the science buddy.
For example:
The slang for the rectum is “prison wallet,” but it could be “Radio Shack.” An inmate was caught wit two boxes of staples, a pencil sharpener, sharpener blades, and three jumbo binder rings in his rectum. He became known as “OD,” for Office Depot.

Facts I discovered during the reading of this book including the origin of the oldest stories of fire-breathing dragons-You gotta read it.

The fact that Elvis did die on the potty..and why.

The gases our bodies make could in fact blow up something in large enough quantities.

I’m sure I’ll quote these and much more to my poor suffering family.
I’m blaming Mary Roach.

One more because I couldn’t resist and you made it through the review: